Five years ago, I walked by my daughter’s room. Contagious  giggles were spilling out from her room. Whitney was in the 8th grade laughing with her older sister Alex as they were looking at Whitney’s middle school year book. Their contagious giggles made me gravitate towards them.
Whitney had received the label ‘Best Smile’ in her year book. My two girls were now laughing over the so called ‘title’ Whitney had received and reminiscing my advice to them over the years.
I heard them say, “Didn’t matter what we were doing, whether sports, music, 4-H, or church programs, Mom’s rule was, do it with a cheerful heart, and just smile, or don’t do it at all.”
They both continued to giggle how my words impacted them and they couldn’t stop laughing. Almost like I had tattooed a smile on their faces.
Listening in, the conversation turned to the “title” Alex had received in her high school year book. Worst car. The roaring giggles continued. Chalupa, (my daughters rust bucket Toyota) was her prize and joy. Named after our family’s love of Mexican food, the rusty, faded, piece of junk car had made the year book. Chalupa for better or worse, had become famous in town. Making my daughter unbelievably proud. Everyone knew Chalupa.  This car was something she had to earn and pay for herself. If she wanted to go somewhere, she had to ration gas to get where she wanted to go and at the same time pray that Chalupa would make it from point A to point B. Sometimes Chalupa made it and sometimes she didn’t.
Here I am, five years later, Whitney Rose is graduating from high school.  Once again, listening to the sound of laughter as all three of my children are now reading Whitney’s year book. They are on the “best and worst” page, and Whitney once again received, ‘Best Smile’ and also earned the title  ‘Worst Car’.
Whitney, had a bright red, almost blinding red rust bucket named “Salsa”, following the theme of naming her car after Mexican food.   Whitney wanted a stick shift, and was I believe one of the only girls in her class that could drive a 5 speed. Salsa was literally so ‘hot’ of a color, you could see her coming a mile away.  Salsa, was her pride and joy.
The two sisters were proud of these ‘so called titles’. Like a tradition had been set. Gavin, my 13 year old was listening in, proud of his two sisters and knew he had tough shoes to fill, but seemed to be up for the challenge. I imagined he had a proud picture in his mind of the rusty contraption he would earn himself one day.
It was listening to my children once again, that it hit me.
Best Smile. Worst Car.
Reflection hit me like a brick wall.
It was true. Over the years, I would remind my children all the time, “if you don’t love it, don’t do it. If you can’t do something cheerfully, then don’t do it all. Just smile in all you do.” 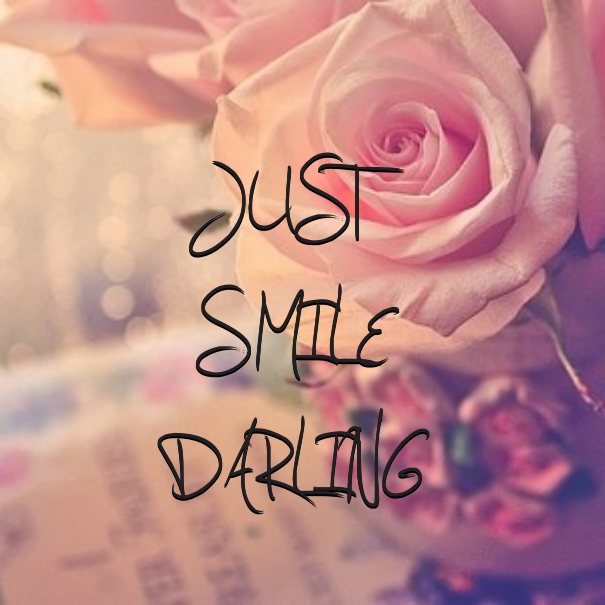 I didn’t care if my kids came in last place in anything they did. What mattered is they came in first place with attitude. That they always walked off a court, show ring, classroom, stage, having given their best, with a smile on their face.
The truth was, I wasn’t the cool parent. I never had an opportunity to play sports and the interests I had, my children all chose different interests.  So, I could never coach them from the sidelines.  Which I always thought wasn’t my place anyway. It was their coach’s job.
There were many times, I felt like a failure. That my children didn’t have the opportunity to be better and do better because I didn’t know better.  All I did, was be there as often as I could, on the sidelines and encouraged them to respect others and just smile.
Together with my husband, we learned with them. Horses, pigs, 4-H, cross country, track, soccer, volleyball, musicals, the list goes on and on, whatever they did, we simply encouraged them to try and do anything and everything. Our rules were simple. They had to completely take ownership to it, and be cheerful. When the cheerfulness stopped, we pulled them out.  When they got to high school, they weren’t afraid to just try something new.
Many times, I would question myself if I was holding them back by not doing more for them.
Until a few years ago, I had the privilege to go to Africa. There I witnessed children living in slums. Horrendous conditions I wouldn’t allow my dog to live in.  The heart breaking reality changed me forever watching a group of children receive the simple gifts of soap, tooth brushes, and a ball. These humble gifts to them were as if they had just won the lottery. What amazed me the most, was the smiles of all these children. They smiled through the pain and hardships most would have never made through. They were the most gracious and happiest children I had ever met. They didn’t have traveling leagues, private music lessons, or even parents to care for them. They were children raising children, grateful to make it through the day finding food and not being raped. After this experience, Derek and I without a doubt, knew that we would continue the ‘just smile’ policy.  It was now non- negotiable for our family.

Sunday, June 5th, my second beautiful daughter Whitney graduated. High school for her, was not what she expected.  She had been in an equestrian accident the end of her 8th grade year.  An accident that made her homebound the last 6 weeks of 8th grade and she had to be tutored.  The same accident resurfaced her sophomore year. From her huge growth spurt, she was now 5’7 and the impact of her previous injury, took a massive toll on her spine. The day her surgeon told us, “Whitney has three bulging herniated discs,” (and went on with a lot of big words); I really had no clue what he was talking about, but it was incredibly hard to hear.
It was when he said, “Her spine looked like that of a 50 year old bull rider” that I knew this wasn’t good.
“I don’t recommend she ever ride horses, run or play sports again.”  The doctor told us.
How to tell my daughter this was the hardest thing I ever had to do for her. The news was going to be devastating to a 16 year old active horse girl.
Derek and I decided to not tell her, what she could never do again.  Because no one can predict that. Only God. We told her the truth of her condition. But we told her the outcome will be just as God wants it to be. God doesn’t know the word permanent.

Whitney ended up sitting on the sidelines the rest of her high school career. Pain 24/7 was now her extra-curricular activity that haunted her the next year. She couldn’t sit or stand. The only relief she got was if she laid on her side.
Whitney was determined to not miss school. Her teachers and principle were outstanding, accommodating her by bringing a cot to school. Her dear friend Bailey, would carry her cot to all her classes and Whitney laid in the back of the room on her cot, till she could take the pain no more, and then I would receive the call to come and get her.
I was no longer sitting on the sidelines of equestrian meets and sports cheering her on. I was sitting on the sidelines of doctor’s appointments, holding her hand when she had injections by her spine, cheering her on through tough therapy, acupuncture, chiropractic, and countless hours of tears.
I had no words for her, and could only pray for her.  The countless days, when the pain seemed to start to cloud her senses, all I could say was, “Whitney, we don’t know why things happen, but you have a choice. To let this define you or refine you.”
My ‘just smile’ rule continued.
“Smile Whitney. Just smile.”
And so she did.
Whitney’s smile sustained her through not just the good times, but the hard challenging times.
Here we are, the end of her high school career. Whitney didn’t participate in high school sports again, instead she took up new interests. Singing. She started to sing all on her own.
And. Can. Whitney. Sing. WOW!
And, might I add you can’t keep a cowgirl off her horse. When you fall off a horse in life, you just get back on. That’s exactly what Whitney Rose did. She got back on. In fact, she rides for her own personal pleasure now on our small farm, sings in the barn to her horses, and is always smiling. God doesn’t know the word permanent damage, neither does my Whitney. 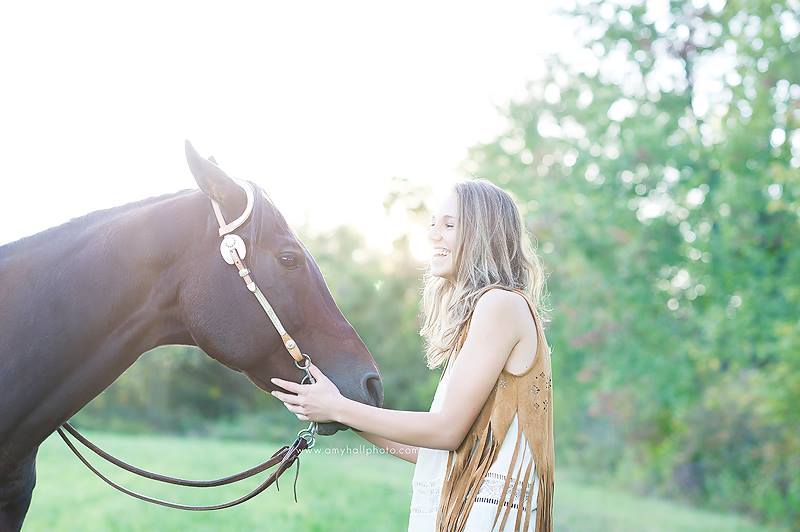 I have no doubt, Whitney will show in the horse world again. It’s her love.  She has made a full recovery with no surgery. Instead, we chose alternative routes and God heals the faithful. She can even run now. She works a couple of jobs, driving her rust bucket and her smile is tattooed on her face.
Best Smile. Worst Car.  My translation is this.
Humble and Kind.
Whitney Rose, you educated us all by being the example. Life doesn’t always go the way we plan. What may have seemed like a sideline high school career, was just the opposite.  Your quiet humble presence impacted everyone around you. Your perseverance, faith, and a beautiful smile while riding in a chariot of a rust is exactly what it takes to become successful.
You are #1 State Champion, Grand Champion, the absolute best in my book Whitney. Your category is OVERCOMING.  The trophy is your heart. The reflection is your smile.
“I have told you these things, so that in me you may have peace. In this world you will have trouble. But take heart! I have overcome the world.”  John 16:33
You overcame, because HE did for you.
Best Smile, Worst Car, in my book are the greatest high school accomplishments a young woman could receive.
When Whitney walked down the aisle after receiving her diploma and looked at me with this beaming beautiful smile, I knew through my waterfall streaming tears, Whitney is about to conquer the world, for this picture says it all. And I COULDN”T BE MORE PROUD!

I wasn’t the only one to capture this smile. The local newspaper did too and she made it in the paper. 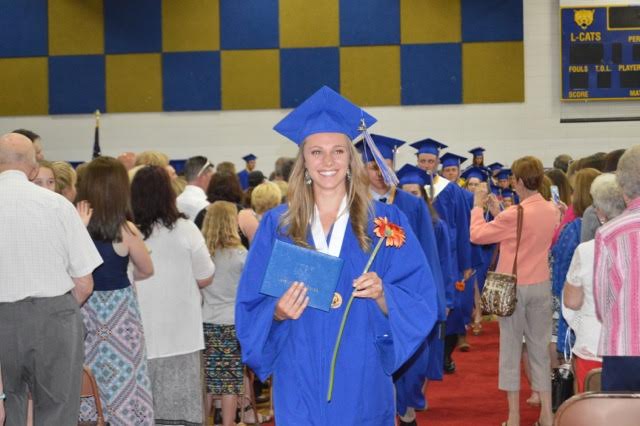 Lake Mills Commencement
Above, Whitney Hein SMILES as she walks out of the Lake Mills High School graduation with her diploma in hand.
Whitney, thank you for teaching us to smile, through the good times and the hard times.
“For I have great plans for you declares the Lord. Plans to prosper you and not harm you, plans to give you hope and a future.”  Jeremiah 29:11 Whitney, KEEP SMILING! The best IS yet to come.
With Love,
Your Mom